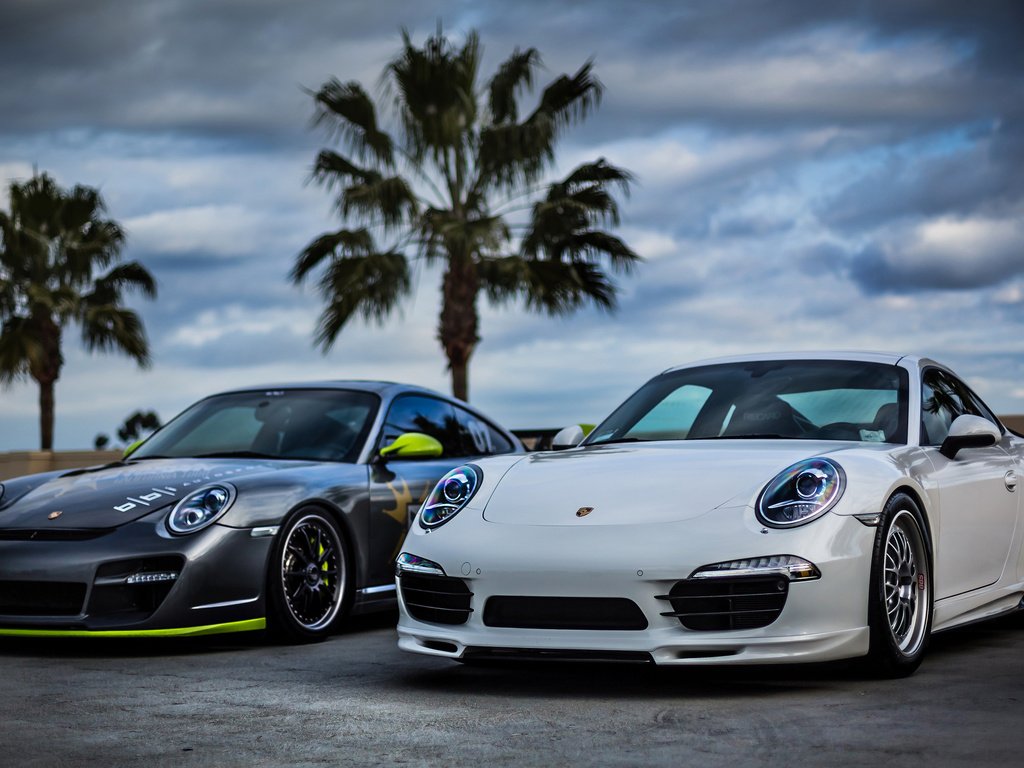 The company was founded by the famous designer Ferdinand Porsche. In 1936, the first versions of the future “people’s car” for all time – the famous “Beetle” “Volkswagen”, which had another name – Type 60.

In 1937, the “Third Reich” needed a racing car to participate and, of course, to win the Berlin-Rome marathon, scheduled for September 1939. That time Porsche project received the support of the National Sports Committee. The work has begun.

Three prototypes Porche “Type-60K-10” were built for this event on the “Zhuk” base, or rather “KdF” (name until 1945), with a 50 hp uprated engines (instead of standard 24 hp). But the war disrupted the publication of this model.

The war years were given to the fulfillment of state orders – the manufacture of staff vehicles, amphibians, tanks and the guns.

In post-war Germany in 1948, the company launched the first car under the Porsche name – a small sports Porsche 356 with a forced Volkswagen engine and a streamlined coupe. Not having time to make its first steps, the car was able to win the race in a week after its appearance. Production cars “Porsche-356” were already rear-engined. The 356 model was produced until 1965 and served as the basis for the Carrera.

Considering the merits and good results of model “356”, shown in 1951, Ferry tries to build a purely sports car. “Porsche-550 Spyder” in 1953 bacame this type of car. This car that repeatedly won one victory after another. Thanks to his victory at the Carrera Panamericana auto race in Mexico in 1953, it became the custom to name the company’s fastest models by this name.

READ MORE
By 1954, the first Spyder with a straight windshield and soft top appeared.

The very first “Porsche-Carrera” was released in 1955. In addition, this modification has received a power plant entirely developed by the experts of “Porsche” company. The same engine was used on the 550 model. After that, laurels fell on the machine’s creators.

The last version of the 550 dynasty, the 718/RS, was released in 1960. As for production cars, the most important step in the development of the range of models was the Porsche 356B, which was easily recognizable by its high inflated bumpers.

In 1961, the 356 GS Carrera model successfully competed in the GranTurismo class. The Carrera-2, appeared in spring, the last and fastest car of the Carrera family.

For about 15 years, the Porsche 356 has been one of the most prestigious sports cars in the world. However, over time, it also became less and less consistent with modern requirements. Something completely new was needed. This car turned out to be another masterpiece of Ferdinand Porsche – the world famous “Porsche-911”. Ferry’s son Ferdinand Alexander took part in the creation of this car. The new car was first shown to the public at the 1963 Frankfurt Motor Show.

1975 saw the release of the Porsche 924, which was considered the world’s most economical sports car.

Three years later, at the Frankfurt Motor Show, a prototype of another masterpiece was presented – “959” model. Collecting everything possible and impossible, she personified the most modern sports car from “Porsche”.

Throughout the decade, the class of prototypes was supplemented by new successful models: “936”, “956” and “962”, which repeatedly collected laurels in the 24 Hours of Le Mans, “959” reigned in the marathon “Paris – Dakar”.

In the late 1980s, 911 Spyder model was introduced. It took three decades before the “Spyder” name was revived. As for the turbo version, it was released in the new decade, or rather, in 1991.

Another gift from Porsche designers was the debut of a new generation of 911 model, Type 993, at the Frankfurt Motor Show, in 1993. Two years later, the Porsche appeared with 408 hp. boxer turbo engine. The same year, “928” and “968” models, which did not meet the expectations, completed their journey.

In 1995, the Porsche lineup was expanded with the seemingly unusual Porsche 911 Targa with a glass roof that can be retractable under the rear window by means of an electric drive.

In order to consolidate its post-crisis position in the sports car market and in the class of “inexpensive” cars, Porsche introduced a completely new type of car – the “Boxter” model, in 1996. The model has a soft (automatically folding) top. Optionally, you can get a version with a hard top. Finally, a “cheap” competitor to the great “911” has appeared.

Next year is the triumph of the new turbo based on the 996 model. With a modest 420 hp it reaches “hundreds” in 4.2 s. And it confirms its direct relation to the rank of supercars.

The latest novelty is Carrera GT. It is rather a prototype, such as the 959. The ten-cylinder V-shaped light alloy engine accelerates to a hundred in less than four seconds, and to 200 km/h in ten seconds.

In 2002, the company presents to the public a full-size crossover Porsche Cayenne S, GTS, Turbo, Turbo Sc with the “hearts” of a racing car. The reaction to such an atypical car for the German brand was initially very controversial, but over time, the car became a kind of benchmark in the segment of expensive SUVs. In 2010, the second generation of Porsche Cayenne appears, which was already expected, which immediately reflected in high sales. In 2017, the third generation is released, which is being produced to this day.

Production and sales of the Porsche Panamera began in 2009 – a five-door sports fastback of the Gran Turismo class with a front-engine configuration and four-wheel drive or rear-wheel drive. The Panamera got its name from the successful performances of Porsche in the Carrera Panamericana race, which took place in the 50s of the XX century. As of September 2010, over 25,000 vehicles have been sold. In the summer of 2013, the Panamera underwent a modernization, with freshened running and chaser lights, and improvements in the interior.

Porsche has already started to appear everywhere on city roads, but just recently this luxury car was a dream of the middle class of consumers and was available only to wealthy people. Now, after decades, in the secondary market you can find budget versions at affordable prices. But you should not rejoice and give in to an adventure, since the maintenance and cost of spare parts for old models may not differ much from new models, and repairing old ones with copies can cost several times more than the cost of the machine itself. In addition, entrust repairs and maintenance only to specialized service centers Hammerhead Auto specialist, where they use professional diagnostic equipment PIWIS 3, as well as authorized Porsche dealers around the world.

In our car service you will find both original and spare parts for your Porsche car, as well as professional replacement of pads, brake discs and brake fluid.

With new models with pneumatic suspension, VW corporate group has introduced a closed air circuit. This significantly improved the performance indicators, since inert nitrogen and dry gas, its use significantly increased the likelihood of no condensate in the system. But over time and car operation, gas leaks through multiple connections of system elements and nitrogen is replaced by atmospheric air, which the compressor produces through the air filter to maintain the operating pressure in the system. Moisture enters and condensation accumulates together with the atmospheric air. And over time, the system fails. Therefore, it is necessary to periodically fill with nitrogen and add a special antifreeze for pneumatic systems to the system. Carrying out all these routine procedures will guarantee the performance of the suspension for many years.